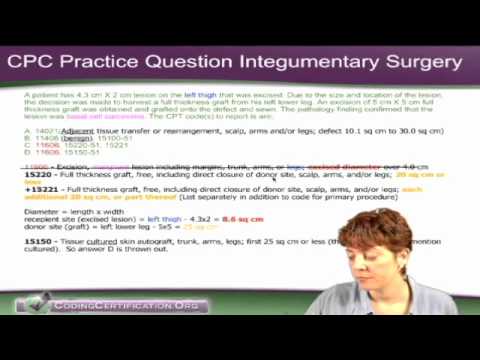 Ok here is a question from Laura, a Blitz student, its about integumentary surgery coding, and she says can you help me with this question?

“When you are coding lesions and they give you the diameter, do you code based on the first square cm or do you multiple that?

This must be from a practice exam and the question reads: A patient has a 4 x 3 cm x 2 cm lesion on the left thigh, (hint: a poll is coming up) that was excised. Due to the size and location of the lesion the decision was made to harvest a full thickness graft from his lower lef leg.

An incision of 5 cm x 5 cm full thickness graft was obtained and grafted onto the defect and sewn. The pathology finding confirmed that the lesion was basal cell carcinoma.

The CPT codes are, and we are given these four choices and she said my answer was, I change it to X because I wanted to see what you guys think it is based on a guess and it was correct but I really need to get a fundamental understanding of the lesion diameter coding.

So let’s do the poll and launch that.

Give you guys a minute or two to fill that out. What do you think the answer is to that question? Votes are coming in, 16 % have voted, I’m not going to tell you which one seems to be the winner.

Let’s see how you did and the student asking the question she picked “C” as well as the majority of you. I ought to make this… what’s that game, who wants to be a millionaire? (Alicia – who wants to be a coder?)

I just repeated the question here, so right off the back I’m looking for the same code in different answers I see 11606 in answer c and d.

The other codes are one of a kind for the questions so my spidy sense says its going to be answer c. or d without even reading the question, which probably a lot of you guys were picking up from the previous tip here.

Just to confirm, I’m going to look at 11606 and I’ve copied and pasted it here, excision of malignant lesion including margins, trunk, arms or legs, excised diameter over 4.0 cm.

So what I did was – with grafting, you normally have to identified the recipient site and the donor site if its an autograft coming from the patient versus an allograft which is coming from like a cadaver or a live donor . but normally live people don’t donate their skin.

So in this case its an autograft because it said patient had the lesion on the left thigh and they harvested a graft from the left lower leg.

So the left lower leg was helping out the left thigh.

OK? So hopefully that makes sense. So if you voted for “c” you were correct. Also if you happen to look up 15150 first instead of the 15220, you could have thrown that out because that one said a tissue culture skin autograft and no where in the blip that we read did it talk about a cultured skin autograft.

It didn’t say that at all, just a straight up graft. So hopefully that will help you a little bit with that integumentary-type question. 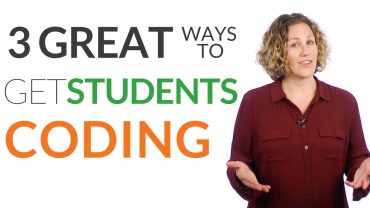